Long time ago I had a Microsoft Natural Keyboard 4000. I was using it at work, while at home I was using a standard keyboard. Both of them membrane. I realized that my typing was much worse on the Natural Keyboard, having far more mistypes than on my home keyboard. Which led me to a) change my work keyboard, b) investigate further about mechanical keyboards (which I had seen mentioned before). Clearly different keyboards affected my ability to type, could changing to mechanical switches have an advantage?

First I got a Cherry Mx tester. I wanted to see if it was worthy to get one. The tester was the 4 switches version: Blue, Brown, Red, Black. I loved the tactiles better, but linear are still an improvement over membrane. Unlike membrane keyboards, which feel like pressing into used chewing gum, the feeling on mechanical switches is far more cleaner, less sticky. My preference from the four was the Blue switch. I always though because it was more clear the moment in which the actuation happens. But now I’m leaning towards the reason I liked it more is the operating force, which is bigger than the Brown ones.

Took me a bit of time to actually go for my first mechanical keyboard (they are not cheap), but after I did I got completely convinced: the sensations are far superior. And typing is slightly quicker when I put the effort in doing so (sometimes I just go Hulk Smash).

So now is time to review them (lightly), in the order in which I bought them. 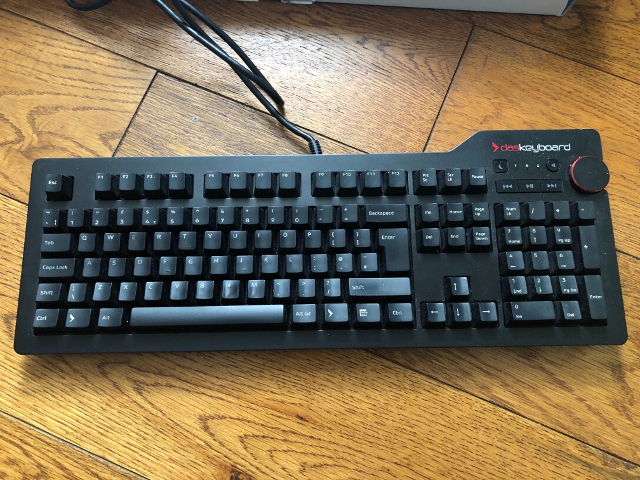 This was my first mechanical keyboard. And is still in my top 2.

It has Cherry Mx Blue keys which, as expressed before, I did favour over Brown switches. The body is metal, which give they keyboard a weight and sturdiness superior to plastic. It is a superb build. And it has a couple of USB connectors, which I found useful in the past.

On the con side there are three items: the funky plastic ruler that should not exist, the strange media controls that I have never used, and the cable not being detachable (that one annoys me mostly when storing the keyboard).

If you want a first mechanical keyboard, this is the one I recommend (even if you change switches to Brown) 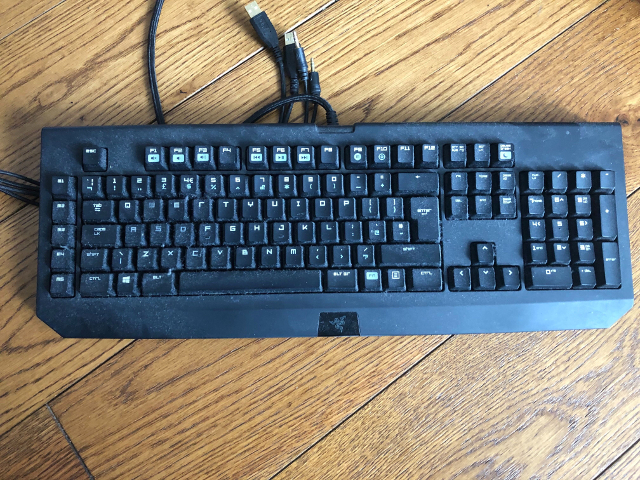 I bought this one for playing, as I didn’t want to mangle my DasKeyboard 4 while hitting Shield Slam like a maniac.

Like other gaming keyboards, it has some additional keys for macros, thought never really used them. Instead of Cherry Mx Blue it has Razer Green, which are very similar to Cherry Mx Blue, but they have shorter travel and a much lower actuation force, quite useful for gaming. The body is plastic, but still feels heavy. It has also a non-detachable cable (with the audio cable), USB connectors, and audio connectors. A very solid keyboard. Nowadays, I think you can only buy the back-lightning version. 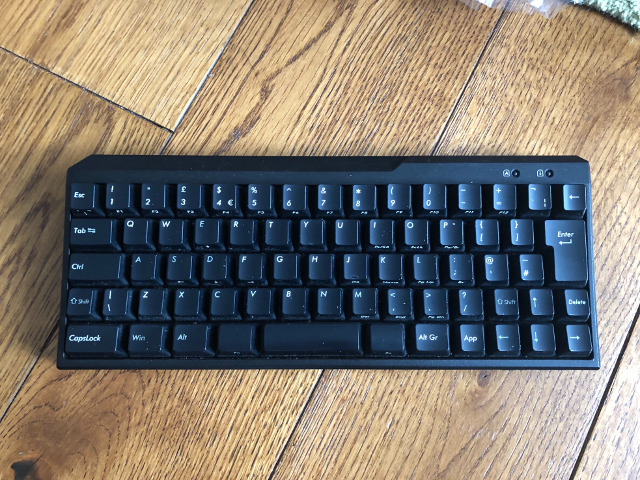 This is the first 60% keyboard I bought. The reason is that the desk I was using at work was a “small” desk (120 width) and I found that I had not enough space available. I went for the Filco offering as I had a colleague that had the Filco Ninja Majestouch. It has Cherry Mx Blue keys and the body is plastic, which shows on the weight (quite light), though doesn’t feel breakable. First detachable cable. Detachable cables are good. In general a nice keyboard.

My biggest issue with it is that the right shift is 1u (same size as any letter key), and I was missing it constantly. I tend to hit the shift key just left of center, so on this keyboard I kept pressing two keys at the same time. The backspace key being 1u wasn’t helpful either.

I stopped using it because of the continuous mistypes. It that was the only keyboard used, probably I would get used to it, but because I was alternating between that one, my home keyboard(s) and the laptop keyboard, it was just too much aggro. 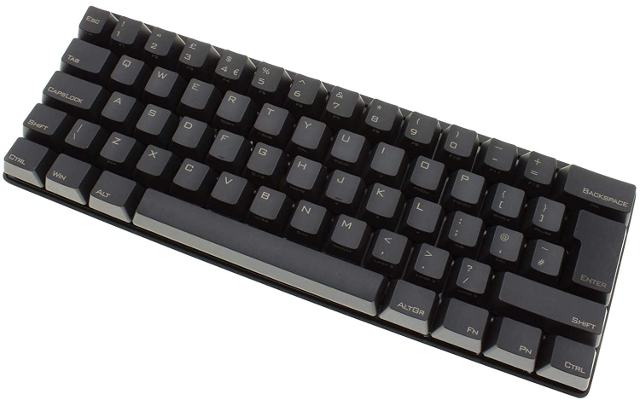 Unlike the other keyboards, the photo is not mine, due to the keyboard still locked at a previous client offices (sigh).

Which is a pity because this is my favourite keyboard, edging the DasKeyboard 4. I wanted to move away from Cherry Mx Blue for office usage because, although I love the feeling, they are noisy … very noisy. I am not a fan of Brown due to the lower operating force. So I got Cherry Mx Clear, which are tactile bump keys like Brown, but heavier (65 cN vs 55 cN operating force). The body is metal. The weight is satisfactory. Also, quite important, is programmable (which for someone that switches Left Ctrl and Caps Lock is pretty useful). The size is good, the feel is good, the switches are superb … it is a great keyboard … a marvellous keyboard. 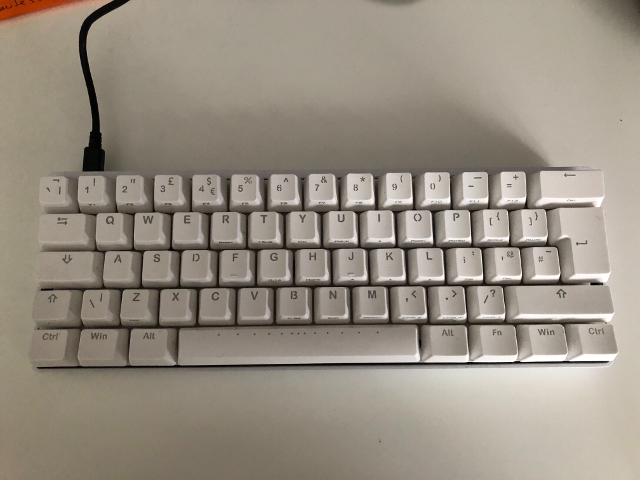 I bought this one for home because I wanted the same experience I was having with the Pok3r at work. The reason I went with the RGB is two-fold: The back-lightning is pretty convenient for home, and there was no option with my preferred switches (if a different version of the Pok3r had been available with Clear switches I would have bough it).

This one has Cherry Mx Brown. The fact that they have such low operating force makes them worse for me, but is not a biggie and, like all Cherry Mx, they are great switches. Like the above Pok3r the body is metal, something that I love. It is also programmable and in addition you can program the back-lights (so I have a day layer and a night layer). The only real problem this keyboard has, which didn’t appear on the other Pok3r, is that if you hit the right Shift and the enter key on specific places (left most for the former, bottom left for the latter) they will make a squeaky sound. At some point I have to see how to fix that, because it drives me slightly crazy. 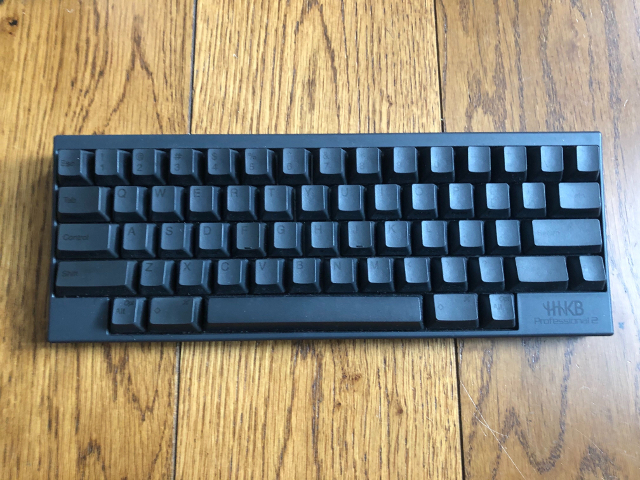 This is the latest addition to my collection. This keyboard uses Topre switches, which are not exactly mechanical (is capacitive, with a combo spring/rubber dome). They are nice, very nice, with really smooth travel and awesome sound. The body is plastic, doesn’t feel weak or bendable, but is not metal.

There are two issues with this keyboard. First, unlike the claim on the linked description of Topre switches, they are not tactile. My understanding of tactile is that you have a clear indication on your fingers of the actuation point. With Topre switches the actuation point is very high, but you cannot feel when it happened. So if you are not looking at the screen where you are writing, you will not know if the key was registered. You end having to use Topre keys as if they were linear. As i was finally getting used to feel the Clear/Brown bump, this was a bummer; The second issue is that the HHKB has a US layout, instead of UK ISO. This brings problems similar to the MiniLa, regarding use of the keys on different keyboards. But worse is that I couldn’t use the UK layout, due to some character missing (was it the backslash? I already forgot), I had to use the US one … which meant I couldn’t use accentuated characters or the ñ when typing. So writing in Spanish became complicated.

One further small note, which baffles me: all the other keyboards can wake up the computer touching any key, but not this one. Strange.